What are you looking for?

FREE SHIPPING to all major Canadian destinations for orders over $75.00 (excluding remote locations). All prices in Canadian Dollars (CAD).

Why Use Organic Seeds?

Why Use Organic Seeds?

The most important thing when you’re starting an organic garden is to buy organic seeds. What are organic seeds? An organic seed is an unaltered seed that comes from a purely raised plant with no genetic modification and that has not been affected by chemical applications or additives. Why use organic seeds? Simply put, all organic growing starts with the seed.

But, surprisingly, most of our organic food grown for commercial purposes isn’t actually grown from seed bred for organic farming. The last several decades of industrial agriculture have developed seed that is suited to intensive chemical agriculture. While this has sometimes resulted in higher yields, it has come with very real costs. Some of the negative consequences of this include air and water pollution, increased pesticide use, greater dependence on fossil fuels, degraded soil health, increased exposure to toxins in farm workers, and the loss of biological and genetic diversity. 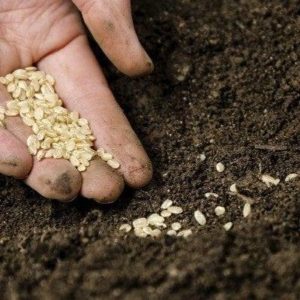 Conventional seeds are grown in conventional systems using synthetic fertilizers and harsh pesticides, whereas organic seeds are grown in organic systems: with a focus on soil and plant health, with natural fertilizers and pest control. That means that organic seeds are bred to perform well in organic growing environments. Instead of being artificially propped up with chemicals, the crops from which organic seeds are harvested are grown to survive and thrive in systems that rely on healthy soil, using the same techniques that you’ll use to grow your garden. If you buy seeds that are bred to grow well in an organic garden, you’ll be ensured that you’re starting out with varieties that have the strongest natural pest and disease resistance.

To harvest seeds, crops must stay in the field much longer than food crops in order for the seeds to mature. The longer a crop stays in the field, the higher its potential for being attacked by pests and diseases becomes. In the case of organic seeds, that means the seed farmer must keep the plants healthy all the way to seed maturity, pulling out plants that get hit by pests and diseases and keeping the ones that make it healthy all the way through the growing season, while staying free from toxic chemicals, till the seeds are ready for harvest. This selecting process means you’re getting seed from the healthiest, strongest plants, which in turn will pass on those genetics to the future generation of seeds.

Conventionally grown seed stays in the fields just as long. The difference, though, is that they are grown with no concern for organic standards. Because seeds aren’t classified as food, farmers are allowed to apply more pesticides to the crop. Coupled with the fact that seed crops spend much more time in the field, this means that non-organic seeds carry even a higher pesticide load than conventional food does.

Because organic growers are not permitted to use synthetic pesticides on their plants, the plants naturally become adapted to withstand pests and other natural enemies such as harsh weather. They have to, in order to defend themselves. When organic seed is used, the plants have that intrinsic strength. In other words, the flavour, colour, nutrition, and natural defenses are bred into the seed.

Organic farmers can plant the same seeds year after year, and conventional farmers cannot. This means that organic farmers can select the strongest, best seeds and use those to ensure that they make up a large share of the crop. Seed saving is a large part of conserving cultural and indigenous seed varieties as part of organic agriculture. However, it is mostly illegal in conventional farming due to seed patents that prohibit saving seed.

Starting our growing process with organic seeds is an essential part of organic agriculture. Growing organically encourages life in all of creation, from the farm worker who does not need to be exposed to harmful chemicals, to the lives of insects and animals living in the area. It improves the health of the soil and water which ultimately provides for the lives of all us. It all starts with organic seeds!